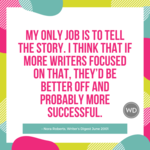 Nora Roberts, who also writes as J.D. Robb, is known for her romance novels. Today she’s out with a new romance, The Rise of the Magicks. It’s the third and final book of her Chronicles of The One series. With these Nora Roberts quotes, we revisit her June 2001 WD interview with Katie Struckel in which she talks about how she views the writer’s job, the most important part of romance books, and her take on discipline.

My only job is to tell the story. I think that if more writers focused on that, they’d be better off and probably more successful. – Nora Roberts, Writer’s Digest June 2001

I think I do have some advantages, not in storytelling, but that I was educated by the nuns. That means I was [raised] with discipline and guilt—they’re very wonderful writer’s tools. – Nora Roberts, Writer’s Digest June 2001

You have to have the discipline to sit down and tell the story, and the desire to tell a good one. – Nora Roberts, Writer’s Digest June 2001

Relationship is what drives the story. Whatever plot there is, whatever outside influences there are, it is all about who these people are and what they’re going to bring to each other. – Nora Roberts, Writer’s Digest June 2001

[We use affiliate links.]

Ready to send out your query? Get a critique!

Are you done writing and revising your manuscript or nonfiction book proposal? Then you’re ready to write a query letter. In order to ensure you make the best impression on literary agents and acquisitions editors, we recommend getting a 2nd Draft Query Letter Critique.