10 Times Ed And Lorraine Warren Were Outed As Frauds

Ed and Lorraine Warren are a fascinating couple if you’re into the macabre. The self-professed Catholics created the New England Society for Psychic Research (NESPR) in 1952 and spent their lives investigating paranormal phenomena. Ed Warren styled himself as a “demonologist” despite never having gone to seminary (he went to art school). Lorraine Warren claimed she was a clairvoyant. Together the couple became famous for their work with the Amityville haunting and the subsequent bestselling novel and horror franchise based on the events.

They also became famous for being grifters.

Ed and Lorraine Warren claim they investigated 10,000 paranormal cases in their lifetimes. If they investigated one case per day, this would take them 27.3 years. If they took weekends and bank holidays off, it would take them 115 years. As we can see from their books and in the Conjuring universe, some of these cases took days or even months to resolve. Ed Warren also had a day job as a bus driver, the couple had a child, and they wrote books, made media appearances, and operated an Occult museum out of their home. How could they possibly have accomplished all of this?

[*] Most famous of all for the couple is the fact that they consulted on the Amityville haunting. The book that told the story of this haunting (and mentioned the Warrens by name) was published by Jay Anson in 1977 and went viral in pop culture. The book became a best seller and a movie adaptation starring James Brolin and Margot Kidder became one of the highest grossing independent movies of all time. The book and movie have also been famously debunked as “based on a true story”. Here are a few concrete examples of confirmed factual errors in the book according to Snopes:

The Lutzes could not have found the demonic hoofprint in the snow when they said they did, because weather records showed there had been no snowfall to leave prints in.
Though the book details extensive damage to the home’s doors and hardware, the original locks, doorknobs, and hinges were actually untouched.
The book and film show police being called to the house, but, Nickell writes, “During the 28-day ‘siege’ that drove [the Lutz family] from the house, they never once called the police.”

It’s also worth noting that William Weber, Ronald DeFeo Jr.s attorney, has publicly stated the story was made up between Jay Anson, the Warrens, and George and Kathy Lutz. 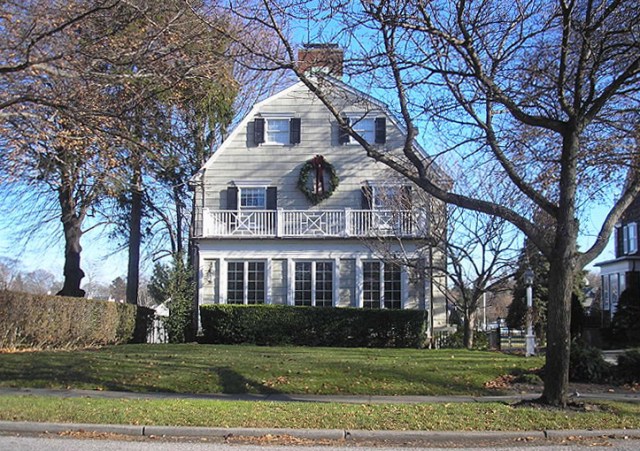 [*] The case featured in the original Conjuring movie was a real life haunting claimed to be experienced by the Perron family. Both Lorraine Warren and one of the Perron children have confirmed the movie is accurate. However, the woman who currently owns the home where the Perron’s lived, Norma Sutcliffe, says the movie is “complete fiction” and ended up making an hour long video about all of them: [*] The second Conjuring movie is about the real life Enfield hauntings. The real family involved in that haunting did get caught faking “evidence” of the haunting as shown in the movie. Also like in the movie, police officers involved really did claim to see objects move on their own at the home. However, as far as the Warrens are involved, people involved in the case say unlike the movie, in real life the Warrens showed up “uninvited” and left a day later. [*] The haunted Annabelle doll that the couple is famous for is certainly an extremely creepy story. That’s probably why the whole story first appeared as an episode of The Twilight Zone which aired 7 years before the Warrens ever met the Annabelle doll. The episode, titled Living Doll was part of the show’s fifth season: [*] The Smurl family says they experienced a haunting so strong and malevolent they saw claw marks appear on the walls. When the Catholic church refused to grant them an exorcism, they called the Warrens. When the Scranton Catholic Diocese eventually sent someone to investigate, that priest wasn’t impressed by the Warrens:

“They weren’t sincere, were not what they purported to be, and were given to sensationalizing. He chuckled when explaining that when he went to one of their lectures, they saw him and toned down their act, so he wore disguises when he went to their future talks.”

[*] Ed and Lorraine were at the center of what even I as a believer in the paranormal consider a pretty obviously fake story known as “the devil made me do it” case which is now the subject of the third Conjuring movie. The story is about a man who murdered his landlord/girlfriend’s boss and claimed in court he was not guilty by reason of demonic possession. You can read the details of the story here. [*] In 1986 the Warrens investigated a funeral home turned family home that was “infested” with demons. The Snedeker family complained of strange behavior in their son, violent and sometimes sexual attacks by unseen entities, and apparitions. This haunting was investigated by the Warrens and became the basis of the movie A Haunting in Connecticut in 2009. The author who worked with the Snedeker family and the Warrens in order to write a book about the ordeal, later recanted the story and said “The family involved, which was going through some serious problems like alcoholism and drug addiction, could not keep their story straight, and I became very frustrated; it’s hard writing a non-fiction book when all the people involved are telling you different stories”.

[*] The New England Skeptical Society investigated many of the Warrens claims. One founder, Steven Novella who is also a neurologist and professor at Yale School of Medicine, said: “You meet them and, ‘“Oh, my god.”’ …The guy had no idea what he was doing, didn’t know the first thing about anything relevant to paranormal investigation or ghost phenomenon.” He also described the Warren’s “occult museum” as “full of off-the-shelf Halloween junk, dolls and toys.”

The Warrens refused to allow members from the Skeptical Society to shadow them on a paranormal investigation or to examine the “evidence” the Warrens widely claimed to have proving the existence of paranormal phenomena. When pressed, Ed Warren said “you can’t have scientific evidence for a spiritual phenomenon.”

[*] The Warrens themselves claim they once encountered a “werewolf demon”. They have an entire book about this case in which they specifically say they have exhaustive documentation backing up their claims. But they never share that documentation. Why? If you were a paranormal investigator working on a case with a real life “werewolf demon”, wouldn’t you snap a photo? [*] Ed and Lorraine also claimed they had video evidence of the “white lady”, a local legend about a ghostly lady haunting the Union Cemetery in Connecticut. If they have a ghost on video, why did they never shown this video to the public? Steven Novella from the New England Skeptical Society says he was only allowed to view the video at the Warren’s home, and that even there it seemed suspicious.

He wrote about this video on his blog:

Their piece-de-resistance is Ed’s video of the famous White Lady of Union Cemetery, in Easton Connecticut. We have only been able to view this tape in the Warren’s home because Ed refused to give it to us for analysis, a common theme in our investigation. The tape shows an apparent white human figure moving behind some tomb stones. Like videos of UFO’s, Bigfoot, and the Loch Ness monster, however, the figure is at that perfect distance and resolution so that a provocative shape can be seen, but no details which would aid definitive identification. Ed Warren has not investigated the video with any scientific rigor, and refuses to allow others to do so. Despite Ed’s insistence that he was engaged in scientific research, he continued to jealously horde his alleged evidence, rather than allow it to be critically analyzed, as is necessary in genuine scientific endeavors.

After the Warrens died, their son in law, Tony Spera, did release the video, which you can view here:

[*] The Warren Occult museum contains haunted and “demonic” objects from cases where it seems like it would have been extremely easy to get verifiable evidence of the paranormal if those cases were real. For instance, in their museum the Warrens had a vampire coffin from a modern day vampire they claim to have met. They couldn’t get hard evidence from a vampire but they could get his coffin?

Beyond the claims that the Warrens fabricated at least parts of each famous haunting they were involved in, there are the extremely troubling claims that Ed Warren groomed a 15-year-old girl he met while working as a bus driver and they eventually had a 40 year relationship. The Warrens officially said they moved the girl into their house because “she had nowhere else to go”.

When Lorraine Warren signed on to consult on the Conjuring movies, she got a contract that states the movies will not feature negative information about the Warrens, including “sex with minors, child pornography, prostitution or sexual assault.” The Hollywood Reporter consulted an entertainment industry attorney who says mentioning specific sex crimes like this is something she has never seen before.