In March of 1962 five Florida teens went on a 7ft Air Force raft to skindive and explore the semi-submerged shipwreck the USS Massachusetts, which sits on a sandbar about 2 miles from shore in the Gulf of Mexico. Only one boy returned. The survivor, Brian McCleary, was 16 at the time and his account of how four of his friends died that day is bizarre and disturbing.

On the trip that day were Brian McCleary and his friends, who were all from the town of Fort Walton Beach, Florida:

McCleary says that the sunny Florida day suddenly turned dark and stormy while the friends were in the raft. Then, the newly turbulent waters started to carry the raft out to sea. The boys tried to attach their raft to a bouy but were unable to do so. At that point they boys left the raft to attempt to swim to shore. According to McCleary, a fog appeared and from the fog emerged “a sea monster”. Brian’s friends were picked off “one by one” by the sea monster. Brian was found asleep on the shore the next day. When interviewed by police, he drew the following picture of the “sea monster” he says he and his friends encountered:

Investigating Brian’s story revealed that the sea monster he saw looked a lot like a character named Cecil the Seasick Sea serpent from a children’s cartoon that had recently aired in the months before the diving trip. One boy’s body was eventually found, and it was determined he died from drowning and had no injuries that might be from a sea monster attack. 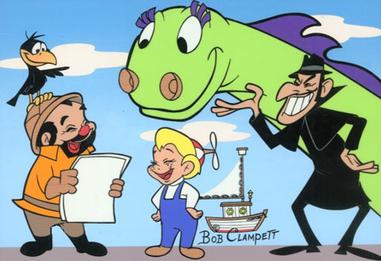 Brian published a detailed version of his story, “My Escape from a Sea Monster”, in the May 1965 issue of Fate magazine:

“After a time the wind and the rain and the waves subsided and a thick fog rolled in. McCleary describes the silence and stillness, writing, “not a wave rippled, not a fish broke water, not a seagull called.”

He said that for the first time in his life he was really scared.

Rice said, “we’re dead. We died in that storm.”

But Ruyle assured him that they would be fine.

Visibility was limited to 25 feet and there was no wind. McCleary says the water was unusually warm.

Larry suddenly said, “Shhhh, I hear a boat or something.” As they listened the air became filled with the odor of dead fish. They heard a large splash about 40 feet away. The wave that followed was large enough to break over the side of the raft.

They heard a second splash, and through the fog were able to make out an object that looked like a telephone pole with a bulb on top. It was about 10 feet out of the water.

Then the object bent in half and dove under the water. There was a period of silence followed by a “high-pitched whine” coming out from the fog.

At this point the boys panicked. They put on their fins and dove into the water. The surface was covered with patches of brown, crusty slime.

The group swam towards the wreck, with McCleary and Ruyle in the lead. Behind them they could hear splashing and hissing. Although the fog was clearing, it had begun to rain again. It was getting dark and the waves were picking up.

The first scream lasted maybe half a minute. Felley cried, “it’s got Brad!” His voice was suddenly cut off.

McCleary yelled back to Felley and Rice but there was no response.

Bill was now swimming with Ruyle and McCleary. Some time passed before McCleary became aware that Bill was no longer with them.

Then a flash of lightning revealed the wreck of the Massachusetts. Another flash revealed Ruyle swimming ahead of McCleary towards the ship.

Then the telephone-pole creature surfaced next to Ruyle. It had two small eyes. It opened its mouth and fell upon Ruyle, disappearing with him below the surface.

Somehow McCleary made it to shore, although he doesn’t remember how. Next he woke up in the Pensacola Naval Base hospital.”

The full Fate magazine story can be viewed on Imgur here. Brian McCleary was depressed in the months after the event as no one would believe him. The trauma of whatever happened that day led to addictions to drugs and alcohol and he died in 2017 taking with him the truth of whatever happened on that day in 1962.

One theory is that a bubble of methane gas could have caused the incident. As one true crime reader theorizes:

“There have been theories that methane is the thing that sinks ships and even takes down planes in places like the Bermuda Triangle. Lake Kivu in Africa is another example of methane fog and explosions. If you look at videos of methane bubbles (YouTube is an easy place to find them) they stir up sediment and combined with the gas itself there is a kind of “fog.” The bubble isn’t weather, more like a short event that most of the time goes unnoticed. So there would have been no fog or storm in the weather records for that day. The monster could have been a creature brought to the surface by the bubble/stream of methane. The gas can also cause hallucinations so maybe the monster was a hallucination.”

It’s also possible that something much more normal happened to Brian and his friends, like simply drowning in turbulent waters or stumbling across drug smugglers and meeting a violent end. Brian’s brain may have rewritten the events as something that was easier to comprehend — like a monster he saw on TV attacking his friends. While it sounds strange, this theory matches other recorded events and what we know about how memory works.

Another theory is that the boys may have encountered a North Atlantic Right Whale, which would be terrifying to encounter from a raft:

“It rises mysteriously up out of the water, glides along, turns side to side sometimes, sinks back down without a trace. In the right (or “wrong”) light the baleen can look almost invisible and all you see is the skinny top part, which looks remarkably like a neck+head.

In fact a couple years ago there was a sea serpent report plus a Youtube video, taken by some excited boaters in Ireland, that turned out to be a NARW (rare now in Ireland but historically used to occur there). In the video the boaters are totally freaking out about it.

The size – ten feet long – and motion – rising up, gliding along, sinking back down – matches McCleary’s description. And NARW do occur off Florida in the month that he saw it (March). They were still quite rare in the 1960s and we had not yet discovered their calving grounds (turn out they calve off Florida, in fact) so it would have been a rare enough sighting that McCleary wouldn’t have known this was a possible explanation.”

Here is what the North Atlantic Right Whale looks like:

If I were swimming or on a small raft with my friends and saw this whale, even if I knew it was a whale I would freak out. If I had no idea this was a whale or any kind of known creature I might absolutely assume it is a human-eating sea monster that no one else had encountered. After swimming for survival and making it to the sandbar without my friends, and then spending the night there alone, I can only imagine what my account of the events would sound like to someone who wasn’t there. Whatever happened to Brian McCleary and his friends, it is a tragic end to what was supposed to be a fun day of adventure and exploration.